Crossbow! The name comes on top when it is about most mainstream and hardcore weapons, whether as movie props or in real-life blood sport.

From the first millennium of BC to the middle ages, crossbows played a notable part in Asian and European warfare. Later, Greeks invented the Gastraphetes, which were handheld crossbows with similar cocking mechanism of compound crossbows. However, not just they lasted for years with a proud history. Even today, crossbow hunters use them as a primary hunting weapon during the hunting seasons.

According to Chinese history, crossbows belong to the arrow family. They were introduced as the mechanical version of traditional bows with more added components. However, The Modern crossbows weigh on average 7 pounds, but the added accessories like the scope, sling, quiver, bolts, and other extras make them heavier.

Hence, the quest of how heavy is a crossbow solves off depending on the type and added components. So, not to drag more, let’s see the brass tacks related to the weight of the crossbow.

How Heavy Is A Crossbow?

Several types of crossbows are available. As stated by Michael Orick, who is USAA State and National Traditional Archery Champion,

“Today, the two most common types of crossbows are recurve and compound crossbows.”

Compound crossbows are considerably more powerful than the recurved ones. They are complicated in mechanisms and tend to be heavier crossbows in comparison because of more parts.

The average compound crossbows are available within the range of 6lbs to 9lbs. When the recurve crossbows weigh somewhere between 2 to 4lbs. The weight can increase up to 12 to 13lbs of the compounds, depending on the extra components. Keep in mind the physical weight of the crossbow, and the draw weight are two different things. Draw weight is the energy the crossbow produces, resulting from arrow weight and bow weight together. How much effective will your hunting be will fully depend on the draw weight of the crossbow.

Additionally, except for the lighter parts in the crossbow, some heavier parts add extra weight to the crossbow. Likely, the Scopes of the crossbow can weigh from a few ounces to 3lbs. Then comes the quiver, which without the bolts weigh slightly less than a pound. Another part that you may not consider as a weight bulker is a sling that helps carry the crossbow. But sling also adds the extra weight of a few ounces to the handheld crossbows. Finally, that’s how combining all the things one can reach to the end of how heavy is a crossbow.

What are The Features of Heavy Crossbows?

Form the two most used types; the compound crossbows are heavier. Though some of them are now available in carbon fiber material to reduce weight, which is not suitable for health as per the research of the national library of medicine. As we have already said, compound crossbows get heavier because of extra added features. let’s have a look at the features of heavy crossbows: 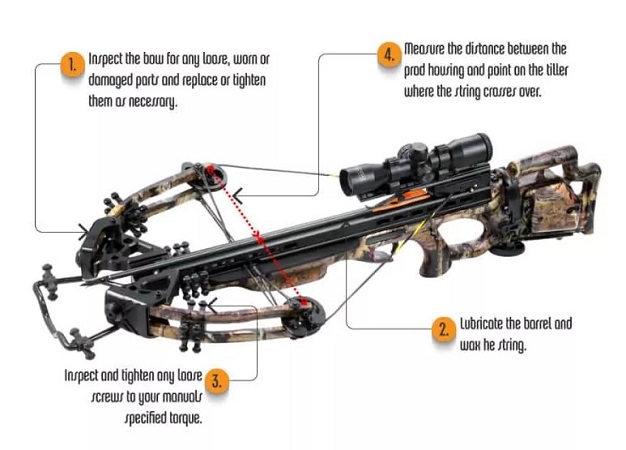 The whole body of the crossbow is known as the stock. Besides, the frame of the compound crossbows has to carry many things also have to survive through the tremendous energy of firing crossbow bolts, so they need to be heavy and strong.

The limbs of the crossbows are the prominent supporters to accelerate the draw weight, ensuring change of kinetic energy to mechanical energy, which is a must in hunting crossbows. Furthermore, the things that look like disks and known as cams remain attached to this part of the weapon. The flex of the limbs also produces kinetic energy and powers the crossbow bolts to reach its destination.

It is the part of the crossbow where the crossbow bolt is placed, and the string slides through. The firing speed of the compound crossbows is 2 or 3 times more than the recurve ones, so the rail needs to be built of heavy and durable material for accurate shooting with the heavy arrow.

It is the lower end of the frame where the arbalist places his grip during use. Additionally, the comfort of this part is a significant matter in the case of a delightful crossbowing experience.

It is the inseparable part of the crossbow, which connects the limbs and helps to launch the bolt maintaining high energy. However, the bowstring needs to be a strong and hardy one to drive a heavy arrow.

The quiver is the arrow holder. Likely, this part remains attached to the body of the crossbow where the bolts remain placed. Moreover, this part with the arrows adds a pound of extra weight to the bow.

Although crossbows are the upgraded version of regular bows, their mechanism is quite like guns, like it has a trigger to shoot the bolt. The trigger of the crossbow doesn’t work exactly like the guns but has quite a bit of similarity.

How Big is a Heavy Crossbow?

In the 1st world war, the British and French used the Sauterelle for throwing bombs that weighed 53 pounds. You may not want one of that size for everyday use. Don’t worry! The compound hunting crossbow, which is marked as heavier crossbows, weighs on average 6 to 9 pounds.  Also, if you are concerned about the size, you can carry them easily on your back. 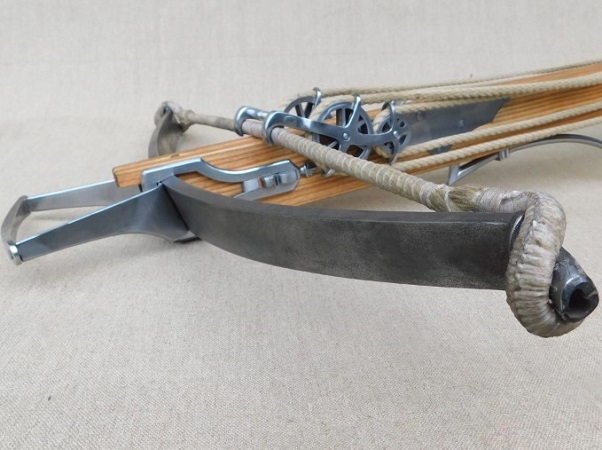 However, the classic crossbows weigh two or three times heavier than the compound or recurve crossbows. And holding heavy loads for long is harmful to health, as the studies of the University of North Carolina shows. According to the discussion on the dragonsfoot forum, some of the young Crossbow Hunters prefer heavy crossbows.

But remember, if it is a matter of hunting, then experience is a big thing, and it comes through ages. So, it will be harder for experienced guys over 60, who are many in number in the US as per the 2018 research of statista, to hunt with a 20-pound crossbow.

How Long Does a Heavy Crossbow Last?

The life expectancy of any tool or weapon depends on the care and maintenance it gets. Although the crossbows are hardcore tools but they also need to be handled with care and regular maintenance. Likewise, with proper care, the cheap crossbows fit for everyday use will last 10 good years without any issues, as the experts say. 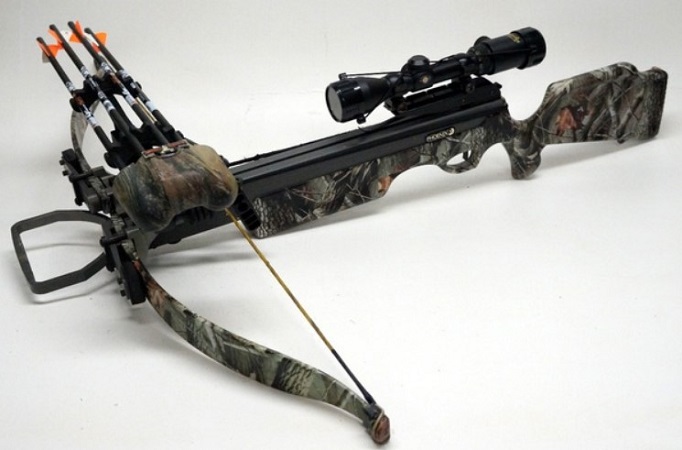 Moreover, one thing to keep in mind, the crossbows are mostly used once or twice a year according to the rules by the state government, so do not go for maintenance only when in use. At least clean them once in every two months, as experts suggest. Give attention to the limbs, cams, trigger, and the rail. Keep in mind, a thing only offers its full efficiency when it is getting handled with complete care.

As the days are passing, the newest versions of modern crossbows are coming out in the market as the replacement of heavier crossbows. So, there will always be uncertainty to answer the question, how heavy is a crossbow? But up here, we have covered the point that will help you to determine the weight of the crossbow no matter what it is made of or what the type is.

Also, the compound crossbows are highlighted here as heavy crossbows because the regular ones are not efficient enough as hunting crossbows and are not so frequently used. In brief, no matter how heavy or light it is, crossbows are deadly weapons that need to be handled to prevent unwanted accidents. Handle them with care and use, always maintaining the regulations.

Affiliate Disclosure: As an Amazon Associate I earn from qualifying purchases. If a crossbow is…

Affiliate Disclosure: As an Amazon Associate I earn from qualifying purchases. Broadheads are available from…

Affiliate Disclosure: As an Amazon Associate I earn from qualifying purchases. Deer hunting with a…

Affiliate Disclosure: As an Amazon Associate I earn from qualifying purchases. Hunting deer with a…

Affiliate Disclosure: As an Amazon Associate I earn from qualifying purchases. Both bows and crossbows…

Affiliate Disclosure: As an Amazon Associate I earn from qualifying purchases. Mastering anything requires time…